The story about the Gnome Valley Railway started with an explanation of why the trains did what and why they did it. So this is the story as told to my grandchildren.

In the early part of the twentieth century, hidden deep in the North Yorkshire Moors, a long-forgotten valley known as Cheverton Dip, was found to house the home of a family of Gnomes mining Barley Sugar Ore. The family, known as the Evereats,  soon became well known in the area for their high quality Barley Sugar Puddings,  the product obtained from Barley Sugar Ore. The growth of the business was rapid and it soon became apparent that transportation was going to be a problem. Mr Evereats, the head of and founder of the B.S.P. Co, (Barley Sugar Pudding Company), having numerous sons decided to send his three eldest to stay with relatives in North Wales to hopefully obtain knowledge on narrow gauge railway systems. It was also hoped that they could acquire on the cheap any redundant narrow - gauge railway equipment. Gnomes being Gnomes are very shroud negotiators where money in being spent, but lack communication skills lead to the purchase by Grom, the elder brother,  of rolling stock suitable for 3ft gauge while, Sven the second son, obtained stock for 2ft gauge. It was then left up to the third brother, Gorbad to come up with a plausible reason for the lack of discussions that had left them in this predicament.

The top end of the valley, being very rugged and heavily forested was felt to be more suitable to the narrower 2ft gauge as it could negotiate the sharper bends that would be required. So, the section from the mine to the processing plant would be 2ft. (32mm track gauge). and the other section from the plant and main dispatch area on up the valley to the main line would be 3ft. (45mm track gauge).
The boys got together and prepared a presentation of their proposals ready to put to Dad on their arrival home.

After lengthy discussions it was decided to go ahead with the 3ft (45mm) section first, and the 2ft (32mm) section to follow on at a later date.(Mainly because there was a large supply of 45mm track available. The shed was chosen as a starting point so as to obtain the working levels needed to continue around the garden, taking into account the need to be wheelchair friendly. The use of LGB track radius 2 and 3 fixed to a fiberglass bolt together track bed system has been used on the majority of the layout, and a maximum gradient of 1 in 30 has been adopted throughout. 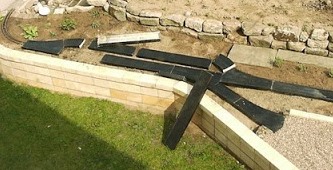 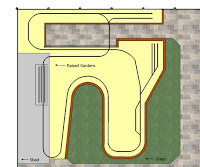 The shed is used mainly as a secure storage area, as well as a base for all the electrics. The track leaves one end of the shed, travelling around a loop and back under itself. It then travels along the edge of a ravine and rounding the next curve enters the proposed junction station, which is the area that also houses the engine shed, coaling and watering facilities, as well as a steam up bay for the use of visiting live steam locos. O leaving the station the line continues round a curve over a small bridge in front of a waterfall and on through a small woodland area, that will eventually be the site of the Tap Plant Nursery. (Well the need for pure, clear water is essential to the production of Barley Sugar Pudding). The line now carries on and doubles back into the shed from the other end. The shed contains an 8ft x 2ft 4-road traverser and then completes the circuit.The Barley Sugar Pudding Factory will be located on the two-road sidings marked at top of map. These two roads will at some time in the future be extended along the back fence and into the barn that stands empty at the moment but is to be converted into our new shop Tuxcraft. The Barley Sugar Ore produced in the mine complex housed in the shed is to be transported from the mine around the circuit and on to to the Barley Sugar Pudding Factory.
This is not mine but is what I hope mine to look like 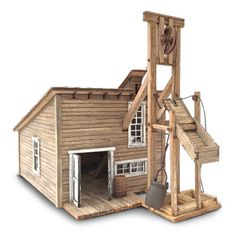 Now as we all know, the waste from the production of this pudding is pumped into settling ponds and this slurry is very high in minerals etc. Now if dried, crushed and distilled it the basic ingredient for one of the Gnomes favorite drinks, Gnomezade.
So the Gnome Valley Bottling plant was set up. Using water from the tap plant nurseries they manufacture and supply Gnomezade all over the valley. As can be seen the Gnome Valley Railway Company have a very lucrative and profitable looking future, as so much of the traffic will be freight. As can be seen from all this traffic the line side buildings will be mainly industrial.

Buildings to be made

A Barley sugar ore mine and waste tip.

A Bottling plant/storage and dispatch department.

A Goods yard with warehousing.

The overall plan then is first to lay all storage roads in the shed and the full loop so running can commence as soon as possible. The junction station is next closely followed by the Barley Sugar Pudding Factory.The Tap nursery 's development will depend on how well the miniature conifers grow and settle in.

That's all at the present so please keep in touch and watch out for further updates as they become available. 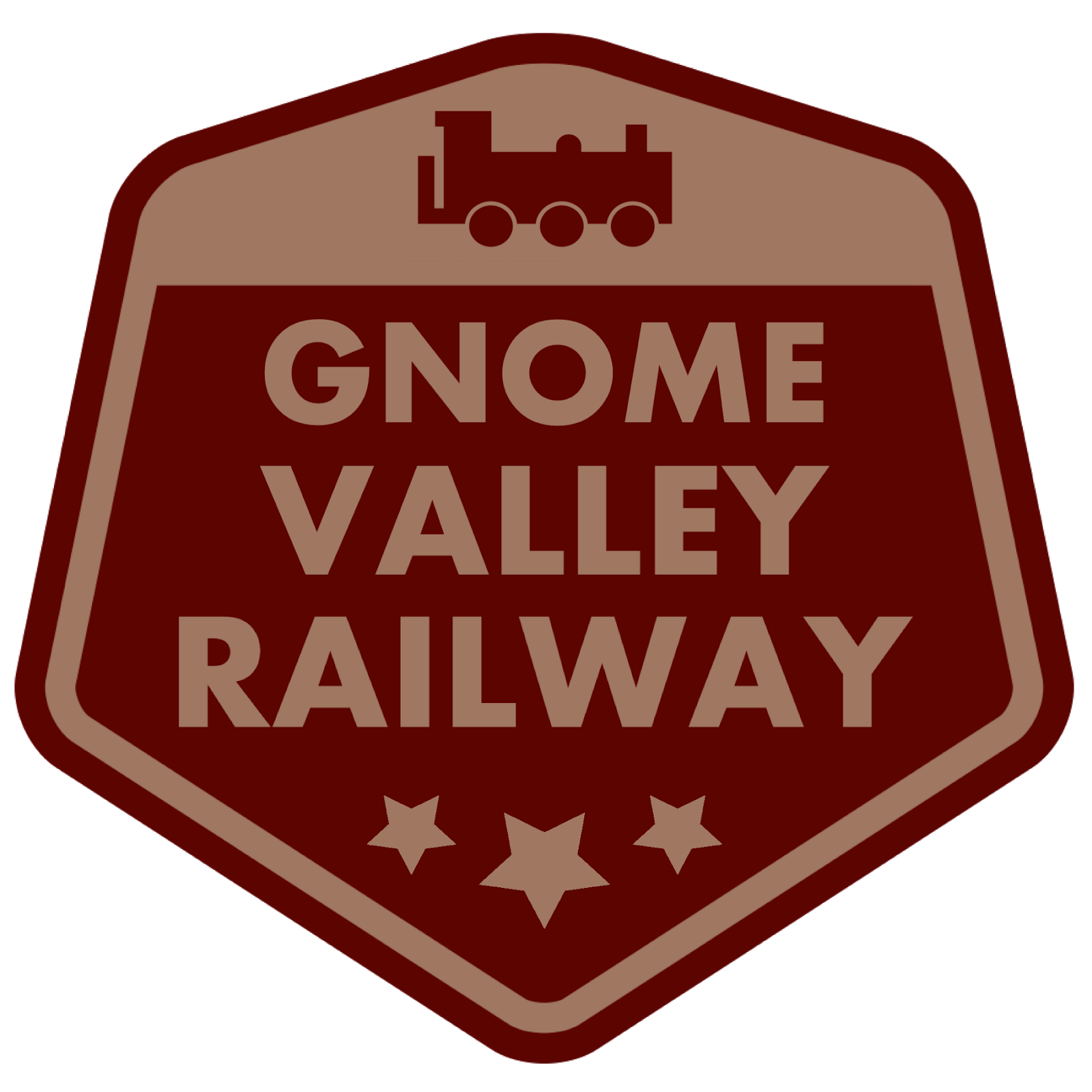